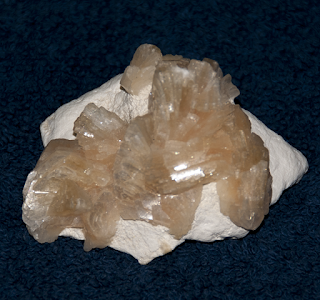 Peach Stilbite, in particular, arrived very quickly on Earth.  What you will notice, when you look at it, is that it has a fan shape.  It looks somewhat like frozen orange juice.  Its shape is indicative of a form-energy that broke through from the higher realms to crystalize on the third dimension fast.  Peach Stilbite almost splashes it way onto the Earth.

When the heart of the soul is in alignment with the emotional body of the third dimensional heart, love can flow.  Love makes the world go round, and it heals the aching heart.  The aligned heart does not have any heart aches.  The person with the aligned heart is happy.  He will be in balance, and will feel good about himself.  After all, the love of the soul is flowing into his heart.  Can’t go wrong with the soul’s love!

Peach Stilbite has another role.  Its secondary function is that it brings the awareness of reason to the intellect to overcome illusions.  Illusions are usually fueled by the emotions and driven by the mind.  So for example, a person may have a misaligned heart.  He may be a jilted lover.  He may be a stalker.  He is someone who is emotionally charged, and creates a great deal of difficulty for the person with whom he thinks he has a relationship.  The emotions are out-of-control due to the misalignment.  The truth about the relationship is beyond his grasp.  He is under illusions, which he will have to overcome to come back into balance.  He needs to return to a state of mind where his emotions are in check and he is aware of reason. 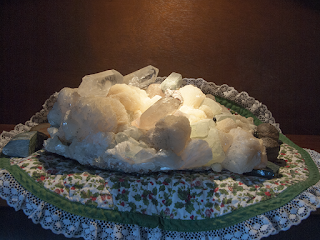 Peach Stilbite works with the intellect to help the delusional person overcome illusions.  It activates the intellect to figure out the problem.  If the problem is with an ex-lover, the realization of the truth might be that the time with that person has passed, and the time to simply move on has come.  If stalking is the problem, the realization might be that self-gratification and terrorizing another person is not healthy, and could lead to criminal charges. Peach Stilbite empowers a person’s intellect to be aware of the reality and of what needs to be done to return to an aligned heart.


Where and how is Peach Stilbite used?  Quite often I use it in crystal layouts where the client lies with crystals on the body for 20-26 minutes.  One could keep it close—on a desk perhaps or even the kitchen table.  My wife and I have a good sized Peach Stilbite cluster at the head of our bed.  I firmly believe that it has enhanced our relationship.  Where would you keep a piece of Peach Stilbite?


Love and Light,
Roger
www.thecrystaltextbook.com
See my online crystals courses HERE
Posted by S. Roger Joyeux at 18:58 No comments: Links to this post